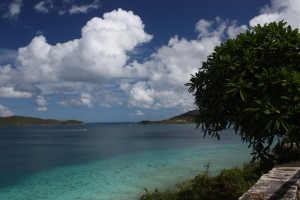 Photo of Annaberg by Roy Montgomery.

Annaberg, seen from the waters of Leinster Bay looks solemn and still. The name, Annaberg, goes back to 1721 when the land was granted to Christopher William Gottschalk who named it after his infant Daughter Anna’ according to historian John Anderson. Annaberg first appears on the Oxholm map surveyed in 1780. There were some 100 plantations in the I8th Century on St. John, but marry of them grew cotton, tobacco and indigo instead of sugar. Owners who could afford to do so built sugar factories and raised cane, but many planters could not afford to do this.

Although Annaberg was built in the I8th Century, the only 18th century structures still standing are the Slave House at Market No. 1 and the wall of the Horse Mill Marker No. 6 All other buildings have either been built or rebuilt during the 19th Century, some of them several times.

While Annaberg is primarily an historic site where the production of sugar and rum can be studied, the ruins are best approached from the shore by foot. On the right side of the trail, going up, is a large Sandbox Tree also known as a Monkey Pistol Tree (Hura crepitans) Note that prickles on this tree are very sharp. If you look along the path going uphill, you may see a few pieces of old Danish porcelain Please leave them where you see them If you’d like to collect old broken china there are a great many pieces of many different patterns in the sand along the Cruz Bay Beach (Children generation ago used these hits of blue anti white china as play money or “Chaynee”

If you step on any of the many beds of biting ants around the sugar factory at Annaberg where some say the ants are still expecting to find sugar, it is interesting to know that helpful “bush medicines” grow nearby. Soap Bush and Batabata when rubbed on bites will relieve the sting you may not recognize these beneficial weeds; even if you do you shouldn’t uproot them hut it is reassuring to know that natural remedies are found adjacent to the homes of biting ants.